Britons will see their money stretch further in almost all of the world’s most popular holiday destinations in 2020, a new report has revealed.

Researchers looked at the cost of eight tourist staples – a three-course evening meal for two with wine, a bottle of beer, a glass of wine, a can of Coca-Cola, a large bottle of water, a cup of coffee, sun cream and insect repellent – in 42 locations.

And they found that prices compared to last year have fallen in 33 of these destinations and by over 10 per cent in 11 of them.

A new report has revealed that Britons will see their money stretch further in almost all of the world’s most popular holiday destinations in 2020. The biggest fall in prices has been on the Caribbean island of Antigua, pictured

The research was revealed in the Worldwide Holiday Costs Barometer that features in the 14th annual Holiday Money Report from Post Office Travel Money.

The report said that 85 per cent of the Post Office’s 40 bestselling currencies are currently weaker against sterling than a year ago and that holidaymakers will ‘benefit from the positive impact this is having on tourist prices in many of the world’s most popular resorts’.

And while the power of the pound is the main reason for this, local price cuts are a contributory factor in 19 destinations, the Post Office added.

In Corfu (£75.91) prices have dropped by 21 per cent compared to last year – the biggest fall in barometer costs in Europe – moving the Greek island to 16th place from 21st a year ago.

It’s Down Under, prices have plunged by over 19 per cent in Darwin (£118.96). Australia is one of many destinations to benefit from sterling’s rise in value. 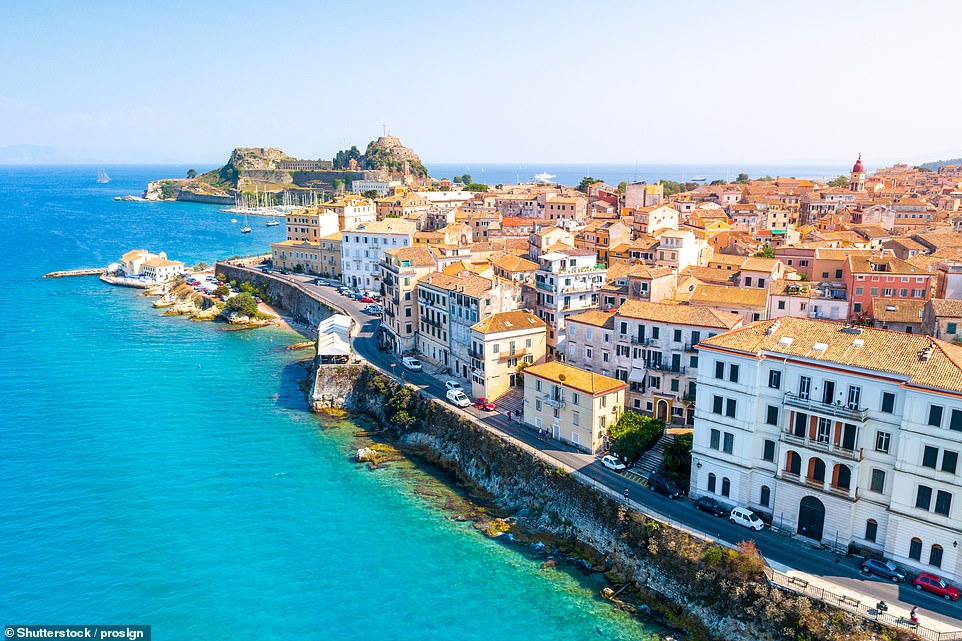 On the Greek island of Corfu, pictured, prices have dropped by 21 per cent compared to last year, the biggest fall in costs in Europe

Singapore (£98.85) has registered an 18 per cent drop in tourist prices, while Jumeirah Beach in Dubai, one of the top choices for Britons travelling beyond Europe, is over 16 per cent cheaper than a year ago (£126.30).

Topping the barometer overall is Sunny Beach, Bulgaria, with eight tourist items there costing a total of just £30.68.

The resort’s rock-bottom prices for UK visitors have fallen a further 15 per cent since last January, making it 30 per cent cheaper than runner-up Turkey, where prices in Marmaris (£44.15) are down 2.4 per cent, thanks to the weak Turkish lira.

Third-placed Tokyo (£48.21) is the best value long-haul destination, overtaking Cape Town (£59.39), which has dropped back to sixth place after registering a price rise of over 18 per cent. 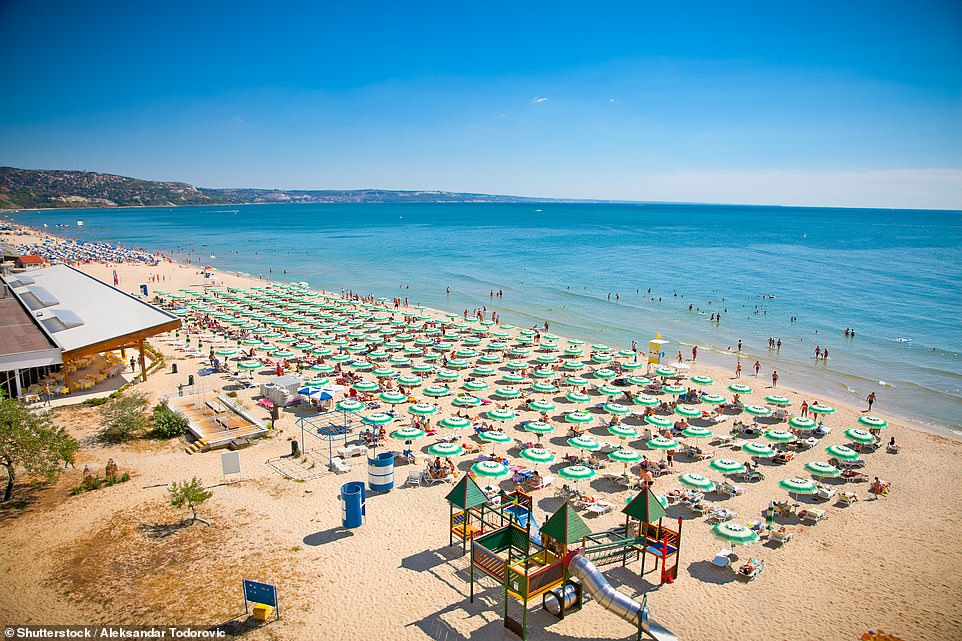 Sunny Beach in Bulgaria, pictured, has been named the cheapest place for Britons to go on holiday. Prices there have dropped 15 per cent over the past year 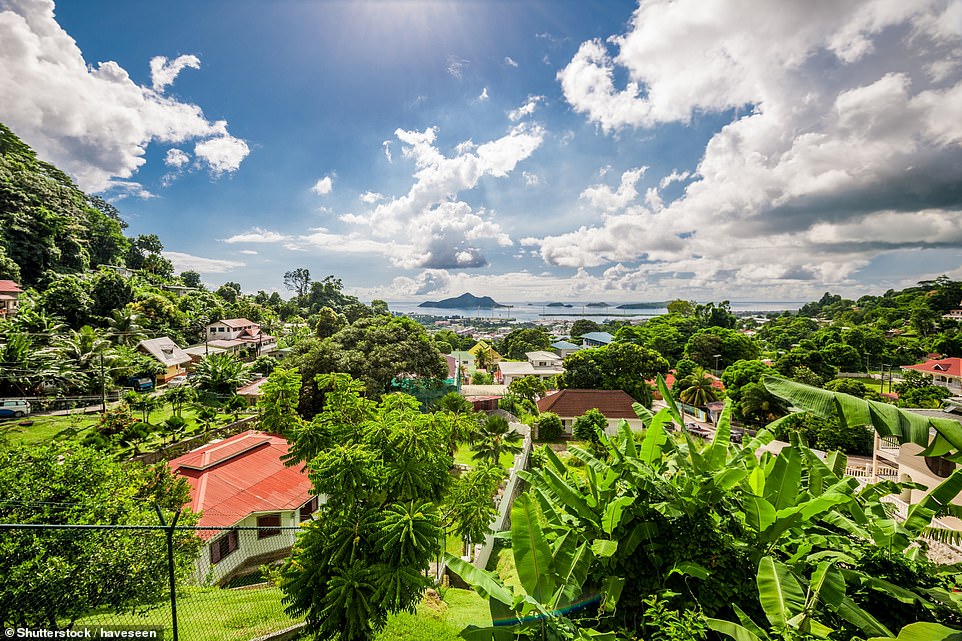 Seychelles, pictured, remains the most expensive destination in the barometer survey despite prices there falling by 10 per cent since last year

Tourist prices in the Japanese capital have continued to fall – this year by over 13 per cent – despite hosting the Rugby World Cup last autumn.

Portugal’s Algarve (£49.87) is again cheapest in the Eurozone and, in fourth place, is one of six European destinations to feature in the top 10.

It has overtaken Bali to become this year’s best value long-haul beach resort.

However, despite widespread falls, prices have risen in over 20 per cent of destinations. 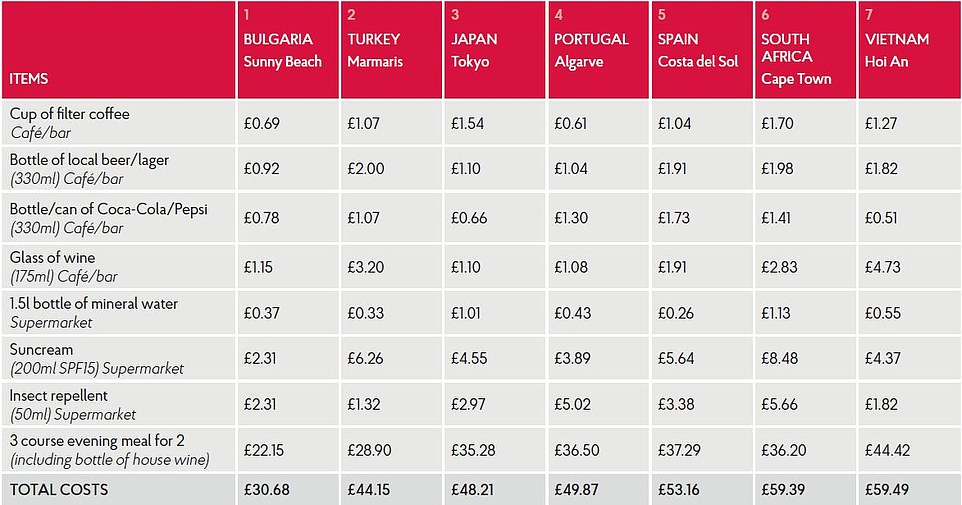 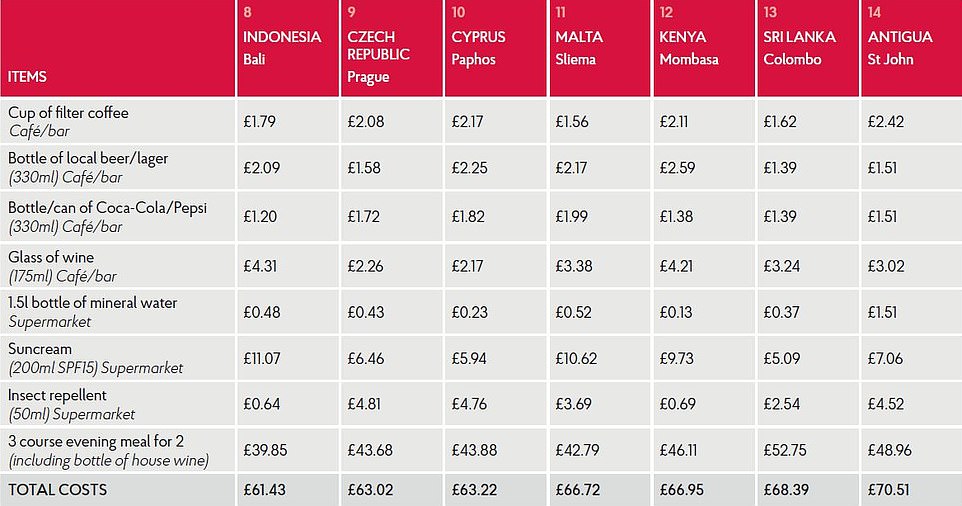 Abu Dhabi (£152.11) and the Seychelles (£165.10) remain the most expensive destinations in the barometer survey – over twice the cost of the top 16 resorts and cities – but prices have dropped by nearly 10 per cent in both.

Post Office Travel Money’s head of travel, Nick Boden, said: ‘With the price falls we found in destinations worldwide, holidaymakers will have plenty of choice in the coming year – provided sterling holds its value.

‘In Europe, the best deals are likely to be in Bulgaria, Turkey and Portugal, while further afield Japan, Vietnam and Bali are looking good bets for the bargain-hunter.

‘The clear message is that holidaymakers should do their homework on resort prices before booking to be sure of the best deal.’

Meanwhile, Post Office Travel Money has also drawn up its Holiday Hotlist of the 10 countries it recommends Britons should visit in 2020. 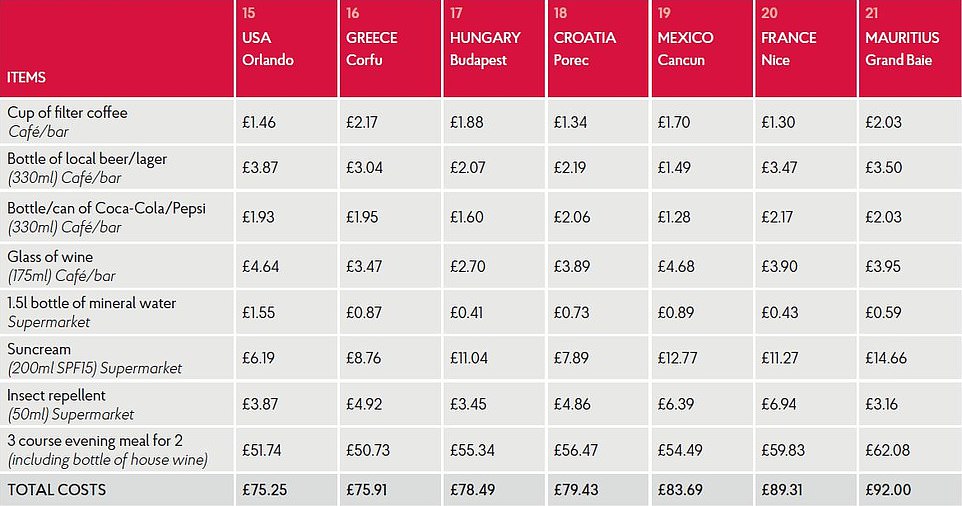 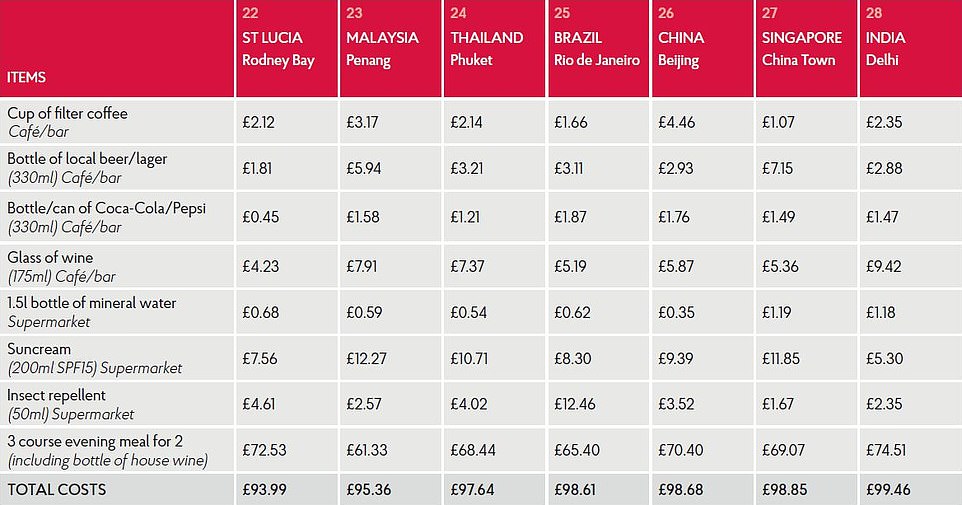 The eight tourist staple prices that researchers studied were a three-course evening meal for two with wine, a bottle of beer, a glass of wine, a can of Coca-Cola, a large bottle of water, a cup of coffee, sun cream and insect repellent

It is based on currency performance, new flight routes, events, low resort costs and the strength of sterling.

Four of the destinations – Bulgaria, Japan, Portugal and Vietnam – feature in the worldwide barometer top 10.

Cheap costs in Bulgaria and Japan have already boosted demand for both destinations.

Bulgaria rose up the Post Office bestselling currencies top 20 after sales surged 17 per cent year-on-year last summer and 28 per cent during the autumn half term.

Japan put on annual currency sales growth of 54 per cent last year and can expect a boost from the Olympic Games this summer.

Chile, Poland and Tobago have also been chosen for the Holiday Hotlist because surging demand for their currencies suggests a change in travellers’ tastes, says the Post Office.

The Polish zloty entered the Post Office bestselling currencies top 10 for the first time in 2019, while the Trinidad & Tobago dollar was the year’s second-fastest-growing Post Office currency with an increase of 58 per cent, which accelerated to 148 per cent for October to December.

Over the past decade Chilean peso sales have mushroomed by 352 per cent – further evidence, says the Post Office, that UK tourists will travel long distances for out-of-the-ordinary experiences.

This year’s Holiday Hotlist is also the first to feature nominations from other travel companies. 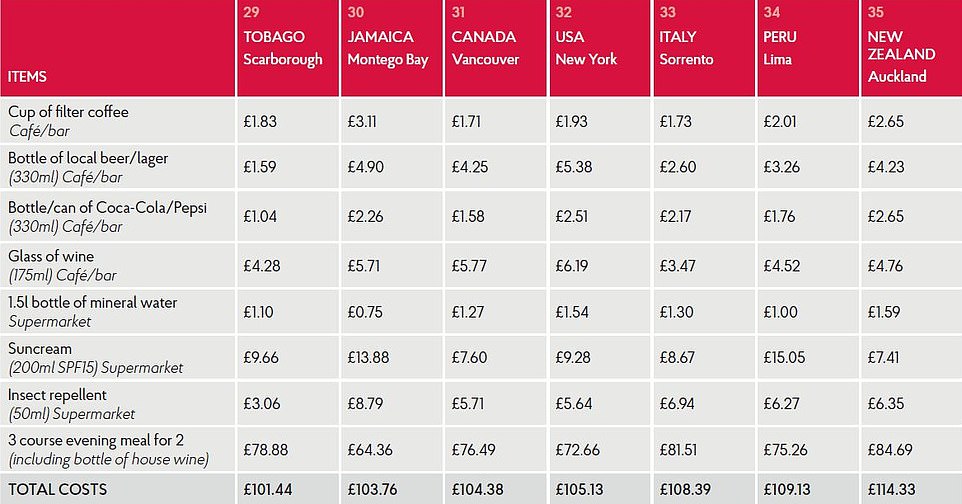 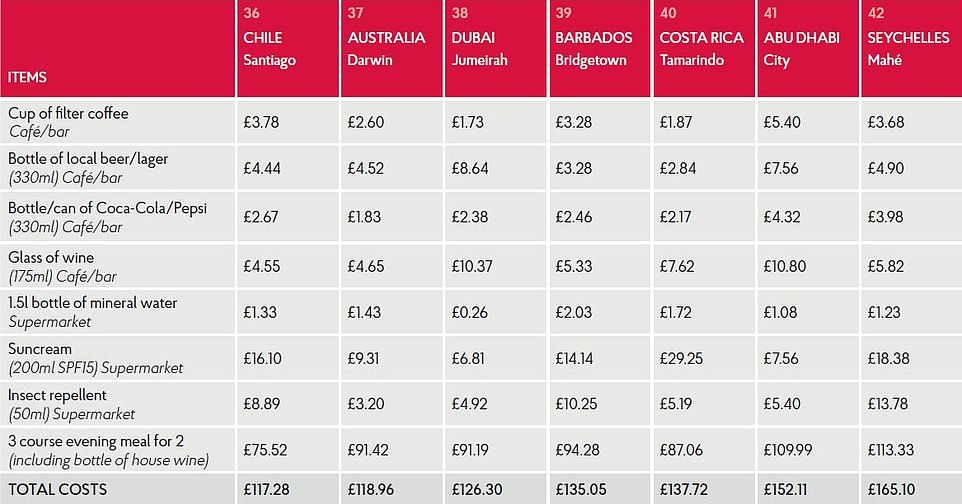 A table showing the most expensive popular destinations for Britons. Despite widespread falls, prices have risen in over 20 per cent of destinations

The Post Office asked three travel specialists with whom it works on its series of holiday costs barometers to put forward their top tips.

Airbnb chose Romania, a destination that saw a 298 per cent year-on-year increase in bookings for the company during 2019.

Finally, Travelbag, Post Office partner in the Long Haul Holiday Report, selected Vietnam, which has established a pattern of strong package holiday growth over the past three years.