My first visit to the island of Spinalonga seems like it was yesterday. In fact, it was 20 years ago, almost to the day.

It was 2001 and we were on holiday. My husband, Ian, our two children (then aged ten and eight) and I were staying just to the east of Agios Nikolaos in Crete in an apartment complex with three other families. It was nice enough, with a swimming pool impractically shaped like the island of Crete, and access to the sea.

Each day, despite pressure from the children to spend the whole time on the beach or by the pool, we were determined to do some sightseeing. By the second week, we had visited most of the archaeological sites in Eastern Crete and all the museums. The kids in the group had seen enough coins and pot fragments to put them off ancient culture for a long time.

The island of Spinalonga, pictured, is less than half a kilometre from the mainland of Crete 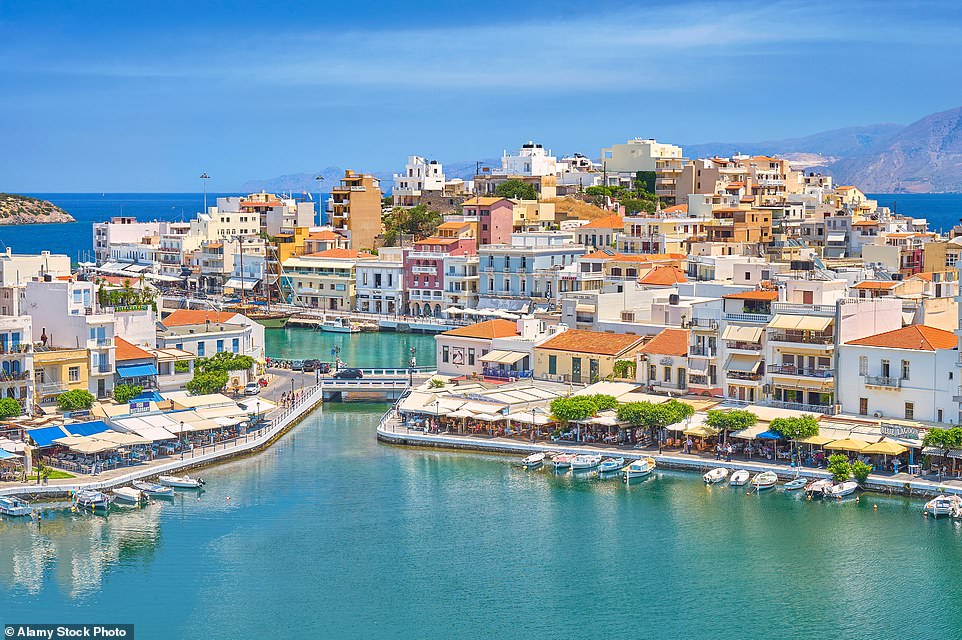 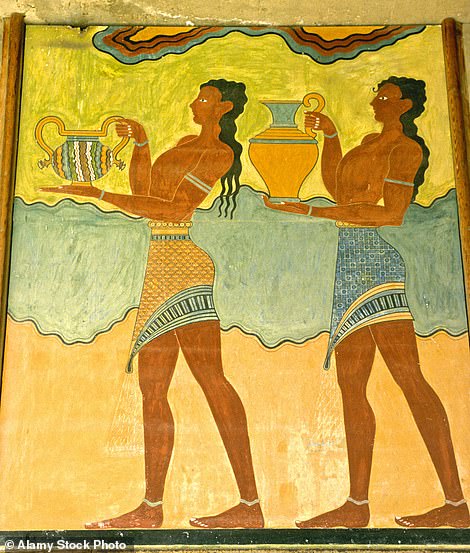 Then I noticed in the guidebook, a three-line entry: ‘Spinalonga: Uninhabited island. Venetian island fortress, Turkish settlement and leper colony 1903-1957.’ It was that latter date that caught my eye. I was born in 1959, and here was the opportunity to connect with a place that was considerably more recent than the Minoan period.

It would still have been warm with human presence when I was born. I knew little about leprosy other than having an image from Ben-Hur in my mind, of sufferers clanging bells and crying ‘Unclean! Unclean!’, and of facial disfigurements.

I imagined fear and stigma. I suppose my interest in going was also partly fed by a ghoulish fascination. It was hard to corral the group of 16, but finally we left and drove 40 minutes to catch the last boat that would take us across the short strip of water.

Spinalonga is less than half a kilometre from the mainland of Crete, and we soon found ourselves stepping off onto the rickety jetty. Since that first visit, I have probably been there well over 100 times.

Spinalonga remains much as it was two decades ago. You arrive beneath the imposing curved walls of the Venetian fortification and pass through a long, dark tunnel that leads into what was the main inhabited area of the island.

For a few moments, in the bend of the tunnel, you are in darkness and it is hard not to feel you are walking in the footsteps of those who were once diagnosed with an incurable disease, people who walked through these shadows and remained there for the rest of their lives.

Emerging into the light, you find yourself at one end of a charming street with little shops, pretty houses, pots of geraniums and often a cat lying in the shade.

Everything is in a state of gentle dereliction but somehow beautiful. The extraordinary thing about this place is that it looks like any other dilapidated but appealing village in the hills of rural Crete.

I was instantly charmed by it on my first visit, not least because of the paradox I encountered. 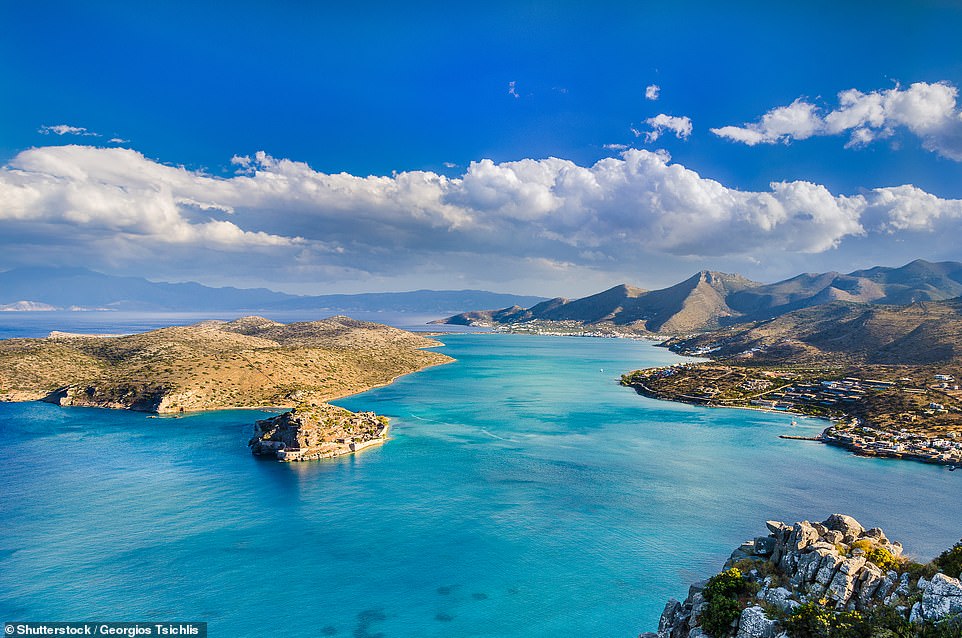 A panoramic view of Spinalonga and the Gulf of Elounda. Victoria writes: ‘On Spinalonga there were decades of suffering, but there was also redemption, and it is this sense of both joy and pain I feel when there’ 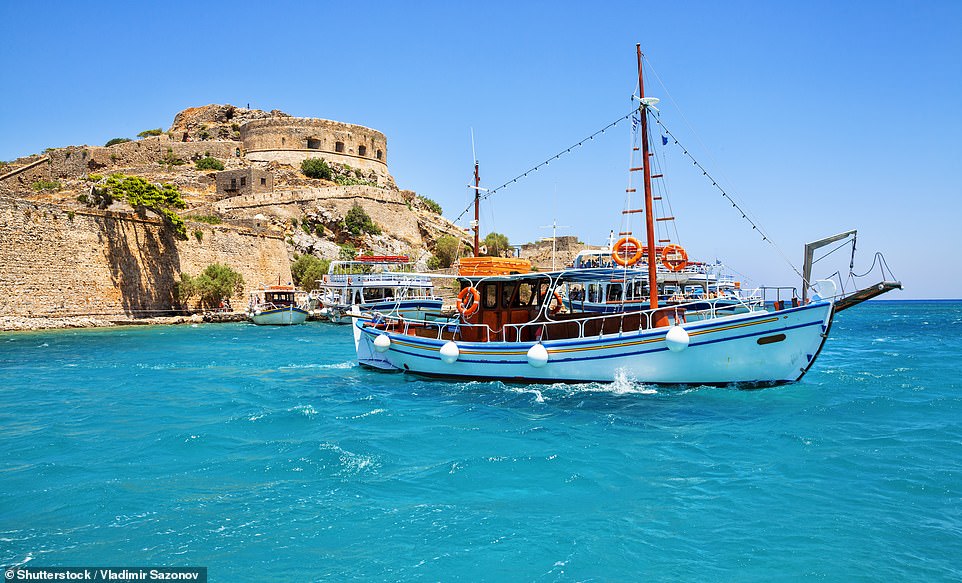 KNOW BEFORE YOU GO…

For more than half a century people were sent to Spinalonga (there was a law, following the discovery that leprosy was contagious, that anyone found to have the disease had to be isolated). Bluntly, they were sent into exile for the rest of their days.

What I always feel when I am there is a sense that they went there to live — not just to die. There is evidence of ‘normal life’ — not just shops, but also a cafe, a communal bakery and two churches.

Up on the hill, above the main ‘High Street’, is a big building that was used as a hospital (high-ceilinged rooms just visible through the boarded-up windows) and also an apartment building.

It takes exactly an hour to walk the circumference of the island.

Although the part which faces the village of Plaka is relatively sheltered, the side that’s open to the mouth of the bay where it is situated is windswept, uninhabited and bleak.

On that side, you pass the cemetery where hundreds of patients were buried over that half century, their bones preserved in a communal ossuary.

There is one really significant fact that buoys up the visitor: that a cure was found for leprosy in the 1950s — hence the departure of any patients still surviving in 1957.

From the moment in 1898 when a Norwegian doctor, G. H. Armauer Hansen, identified the leprosy bacteria under a microscope, the real work to create a cure began. Until that time its source was mysterious and many still believed that it was a curse from God.

The same treatment (a sulphur-based drug) that liberated the patients of Spinalonga is still successfully used today wherever leprosy is identified.

On Spinalonga there were decades of suffering, but there was also redemption, and it is this sense of both joy and pain I feel when there.

It’s a unique place, a monument to the strength of the human spirit — and a reminder of the extraordinary work that scientists do for us all in finding cures for common diseases. 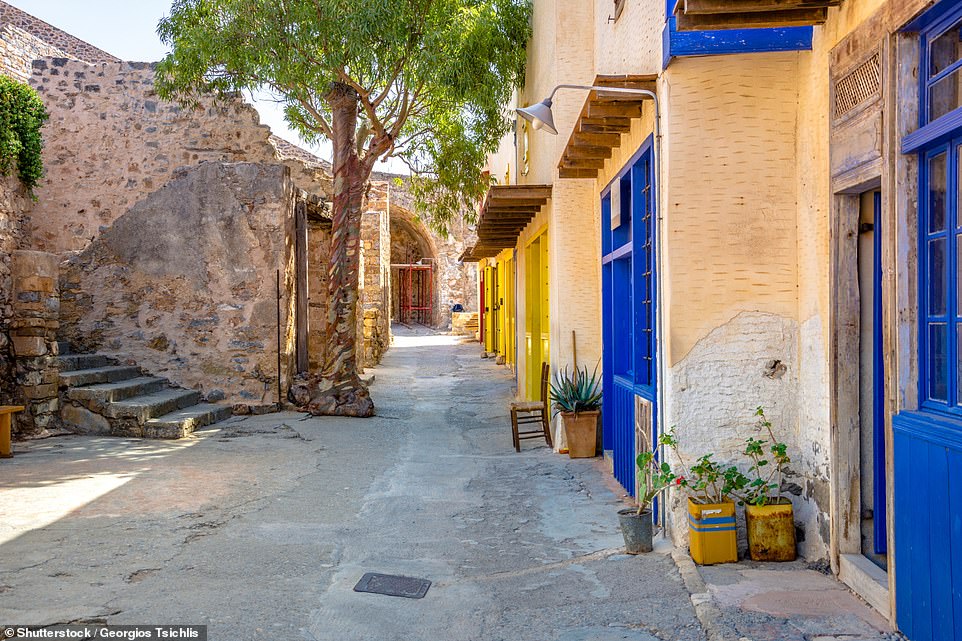 Victoria says that on Spinalonga there is ‘a charming street with little shops, pretty houses, pots of geraniums and often a cat lying in the shade’ 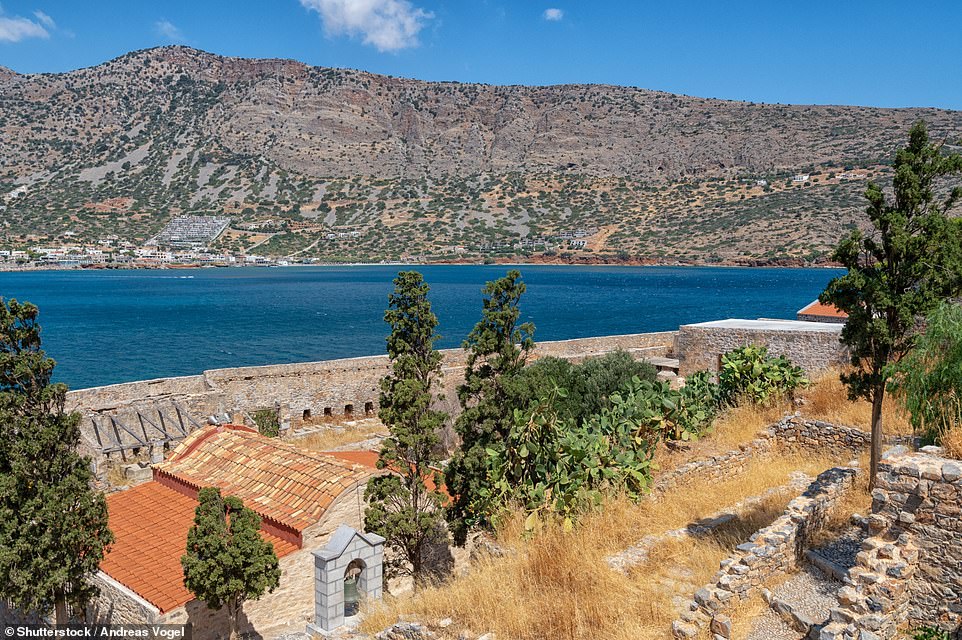 Leprosy sufferers were exiled to Spinalonga (pictured here looking out at mainland Crete) from 1903 to 1957. ‘This island, a former leprosy colony, changed many people’s fate in real life,’ says Victoria 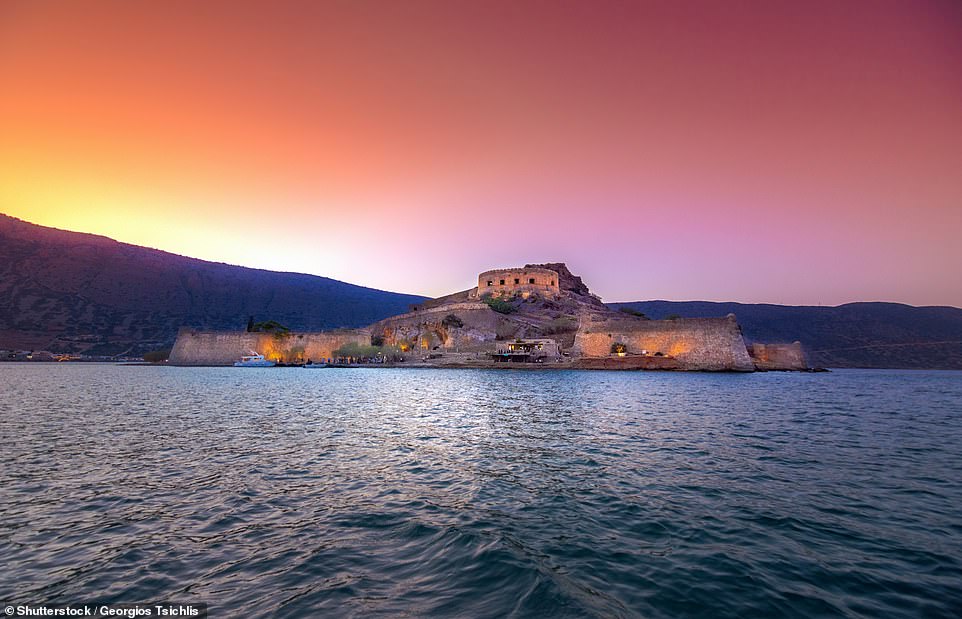 ‘I was instantly charmed by it on my first visit,’ Victoria says of the island, pictured, adding: ‘Spinalonga remains much as it was two decades ago’

Boats depart from Elounda Port to Spinalonga every 30 minutes in the summer, £10 return (getyourguide.com). Maria’s Island by Victoria Hislop and illustrated by Gill Smith is out now (Walker Books, £10.99 hardback).

In some of the restored shops, there is a series of excellent display boards with the history of Spinalonga from Roman times to the 1950s — along with objects that have been found from ancient to modern times.

And there is, of course, a cafe (with toilets) selling souvenirs, a nice place to sit while you are waiting to board your boat to take you back to the mainland.

My novel about Spinalonga, The Island, which has been translated into 40 languages, was written for adults.

A year or so ago, a school teacher in Crete told me that she wanted to introduce her class to loss, fear and isolation (all the more relevant now that we have lived through a period where an incurable disease threatened us all, both young and old).

I realised that the central character at the beginning of my original story is a little girl, Maria, so re-shaping it for children was a natural process.

The illustrator, Gill Smith, then came to Crete and I watched her gather inspiration and ideas for her exquisite and touching pictures.

They capture the pathos of the situation in which Maria finds herself in a really magical way. 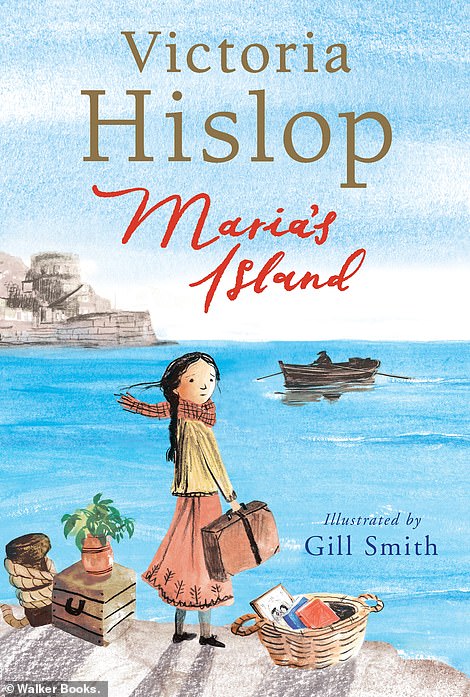 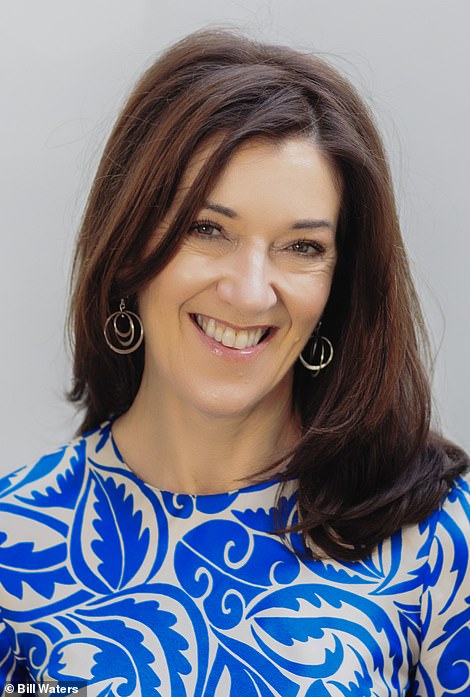 Dark history: The ‘exquisite and touching’ illustrations for Victoria’s new book, Maria’s Island, were inspired by Spinalonga. Author Victoria Hislop, pictured, has been to the island over 100 times since her first visit twenty years ago

It sounds strange to say it, but from the moment I stepped onto this little island I felt a strong emotion — and many people who have been there tell me they felt this too.

This island, a former leprosy colony, changed many people’s fate in real life.

It changed mine, too.

Somehow, it seems wrong to be lying on a sunbed, drink in hand, staring at the tiny island where just 70 years earlier men, women and children were packed off to perish. But, then, it’s impossible to feel too maudlin when the sun is blazing and the iridescent water of the Gulf of Mirabello is lapping at your feet.

But this is the incongruous view we have from the beach bar of the Cayo Exclusive Resort & Spa. In fact, the former leper colony on Spinalonga is so close you can see its bleached stone houses. 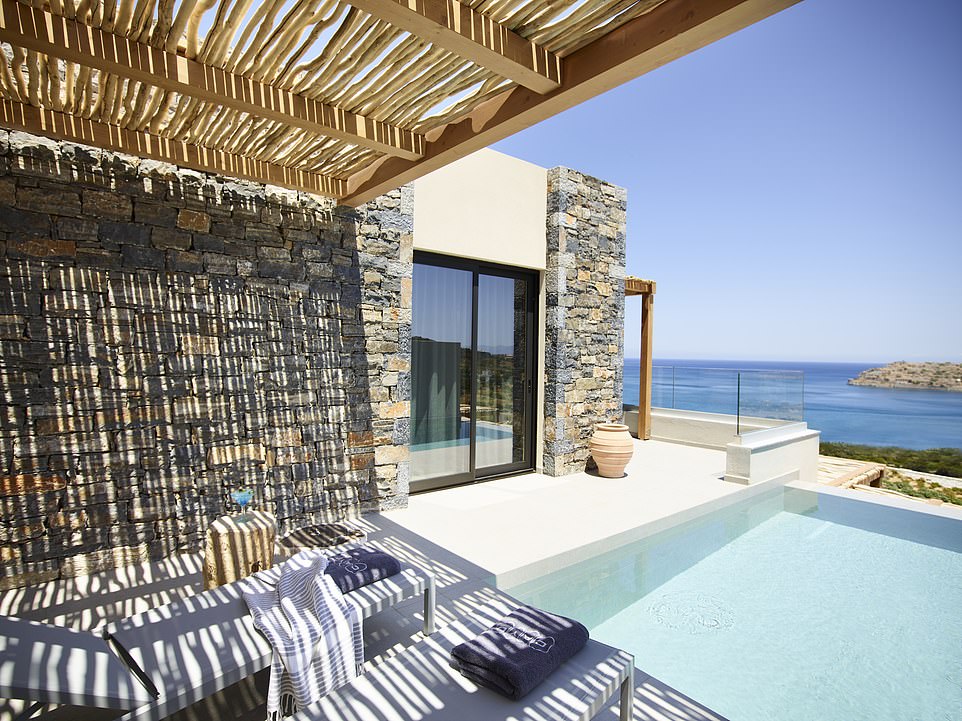 Chic idyll: Take a load off at the Cayo hotel resort in Crete, pictured, which offers views of Spinalonga

The Cayo is the latest hotel resort to pop up on this chic stretch of north-eastern Crete, opening its doors in May to anyone lucky enough to be able to travel.

It sits on a hill above Plaka, the fishing village and former supply depot for Spinalonga, which is now a delightfully low-key string of vine-covered tavernas, boutiques and bars. The Cayo is an easy spot to unwind.

From the outside it’s all designer hewn stone, but inside the staff could not be warmer or more friendly, welcoming anyone from the UK with a joyous: ‘You’re here! We’ve so missed the Brits.’

There is plenty to do, from yoga to water sports but after such a torturous lockdown, my favourite spot was at the beach, lying under an umbrella on a padded sunbed doing nothing more vigorous than reading my book.

The menus in the three on-site restaurants are one of Cayo’s big draws, created by Lefteris Lazarou, the first Greek chef to be awarded a Michelin star and are the antidote to the feta-fatigue one can suffer while on Greek holidays.

Add two infinity pools and a spa, gym and wellness centre and you can’t be blamed for forgetting about the area’s grisly history, can you?